Three second-half goals by Anthony Elanga, Mason Greenwood and Marcus Rashford secured a 3-1 win for Manchester United against Brentford in West London, in the teams’ first league meeting since 1947. The victory was a historic moment for the ‘Red Devils’ as they became the first Premier League side to achieve 300 away wins.

Cristiano Ronaldo returned to the side in place of Edinson Cavani and was almost found early on by Bruno Fernandes, with home captain Pontus Jansson making a timely interception. However, Thomas Frank’s men then enjoyed a spell of dominance, creating several chances. Mathias Jensen was denied from close range on his 100th ‘Bees’ league appearance by David de Gea’s outstretched left leg before Vitaly Janelt’s curling effort was blocked by Victor Lindelöf.

United were unable to get their forwards into the game and a poor corner saw Brentford break as Jensen was repelled for a second time by De Gea before Ivan Toney’s follow-up was almost knocked into his own net by Raphaël Varane. The hosts will have rued the fact that they weren’t ahead and United came alive quickly after the teams returned, Ronaldo heading onto the bar after Fernandes’ cross.

On 55 minutes, the deadlock was broken as Fred’s perceptive pass found Elanga in the box and the 19-year-old held off Mads Roerslev, flicked the ball in the air and nodded over Jonas Lössl into the corner. Brentford didn’t have a huge amount of time to recover before United doubled their advantage courtesy of Greenwood, who ended a league scoring drought stretching back to 16 October. Scott McTominay’s clipped pass was brilliantly chested into Fernandes’ path by Ronaldo and the Portuguese midfielder surged forward before squaring for Greenwood, who tapped into an empty net. The points were sealed as McTominay worked tenaciously in the middle of the park and then laid off to Fernandes, who slipped in substitute Marcus Rashford to lash home as United saw out the victory, their first in the league in 2022, despite Ivan Toney’s late consolation, which came after a penalty-box melee following a corner.

Manchester United remain seventh, but are now within two points of fourth-placed West Ham, who they host on Saturday, while Brentford play Wolverhampton Wanderers the same day. 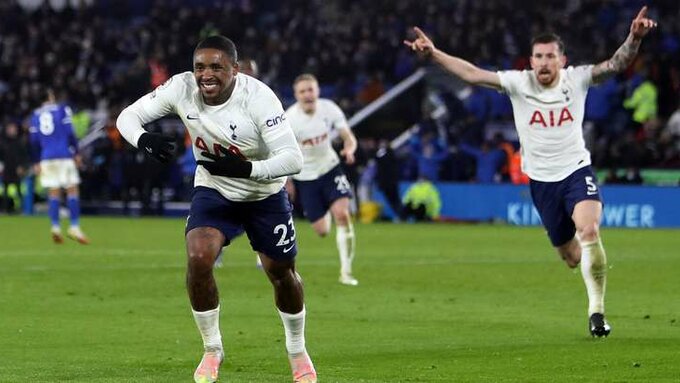 Steven Bergwijn’s injury-time double for Tottenham Hotspur stunned a Leicester City side that seemed destined for certain victory, and revived the London club’s hopes of a top-four finish, as well as extending their unbeaten start under Antonio Conte to nine league games.

Spurs dominated the opening stages and looking to add to his 17 goals in 16 matches against Leicester – his most against a single opponent – Harry Kane could have handed his side the lead from two gilt-edged opportunities. Luke Thomas was responsible for the first not nestling in the back of the net, clearing off the line after Kane had beaten three defenders to set up the shot from close range. Shortly afterwards, at the peak of the visitors’ pressure, Kane headed onto the bar following a corner.

In typical fashion, the ‘Foxes’ broke swiftly with their first attack of the game five minutes later, and Patson Daka finished from a tight angle, though he was aided by some sketchy defending. Tottenham didn’t take this lying down, and continued their onslaught against the hosts.

When Pierre-Emile Højbjerg had another attempt cruelly cleared off the line, it seemed like Spurs were destined for an irritating night at the hands of Brendan Rodgers’ tricky side. Moments later though, Spurs won the ball on the halfway line before working it through to Kane. The striker made up for his earlier misses with his 250th club-level career goal, cutting inside past Çaglar Söyüncü before curling in off the post from inside the box.

This set up an angsty second half, and the battle turned into an end-to-end encounter, but once again, despite Tottenham’s dominance in terms of the number of chances, Leicester found themselves ahead with 15 minutes to play. Always full of dynamic energy, Harvey Barnes made an instant impact off the bench, teeing up James Maddison to fire in off the right post for an apparent winning goal.

The hosts thought they had done enough for the three points, although Antonio Conte had an ace up his sleeve, bringing Steven Bergwijn off the bench. Seconds before the five added minutes were up, the Dutchman stormed into the box to power in an equaliser, and straight from the restart led another counter attack that he arrowed into the net in the 97th minute to break Leicester hearts.